We invited five noteworthy locals to sample the signature bison entrées at Ted’s Montana Grill. Here are their verdicts.

An artist, an athlete, a writer, an event planner and a community activist. Those were the five personalities comprising our guest list for what we called our first “Out & About Roundtable.”
Their mission? To try bison entrées at Ted’s Montana Grill at the Christiana Fashion Center and rate their experience. We chose Ted’s because the chain serves more bison than any other group of restaurants in the world.

Most of our guests had only ever ordered bison once or twice, and no one had eaten it on more than five occasions. Since the meat is largely a rarity in these parts, all of them looked forward to the opportunity to try it again.

The evening started with wine and introductions, followed by conversation that flowed easily from one topic to another, with lots of shared insights and laughter. But when the food was served, talk revolved mostly around the meal itself. The guests also seemed impressed by the restaurant’s commitment to environmental practices and unique sustainability standards (See sidebar).

In alphabetical order, here are our guests and their comments on the meal: 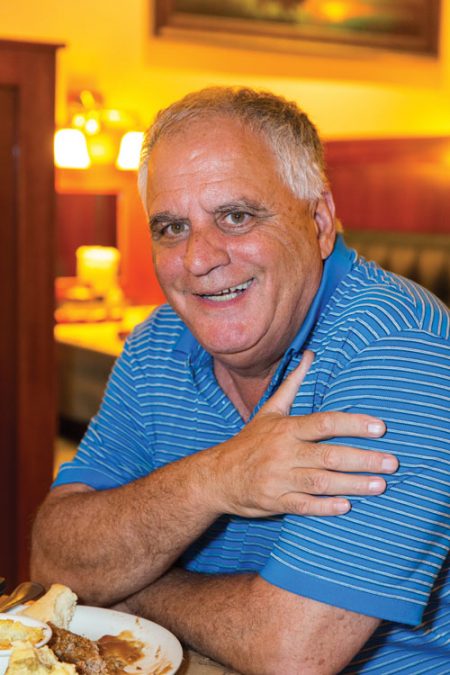 Paul Calistro
Calistro has more than 30 years of community service, including 26 as executive director of West End Neighborhood House. He is also the founder, CEO, and president of the Cornerstone West Community Development Corporation. Through both organizations, Calistro leads community revitalization efforts on Wilmington’s West Side.
What he ordered: Bison meatloaf with garlic mashed potatoes and “Aunt Fannie’s” squash casserole.
Thoughts on his meal: The meatloaf was outstanding: firm, moist, great texture. Unlike many restaurants, [theirs] was not masked by sauces, but stood on its own. Honestly can say it was one of the best meatloaves I’ve ever had. If you like meatloaf you’ll love this dish. The garlic mashed potatoes were prepared nicely and again required no additional sauces or condiments. Top quality. The squash casserole was not my favorite. It was served hot, and had a good texture but seemed rather bland.
Thoughts on ordering bison again: If I was offered traditional meatloaf versus bison, the bison would be my choice, hands down. Their meatloaf surpassed even my grandmother’s secret recipe. I also tried the filet and pot roast and was impressed with both.
Other thoughts: Don’t forget dessert and appetizers. Loved the shrimp appetizer and the apple pecan crumb ice cream dessert. Gigantic portions. 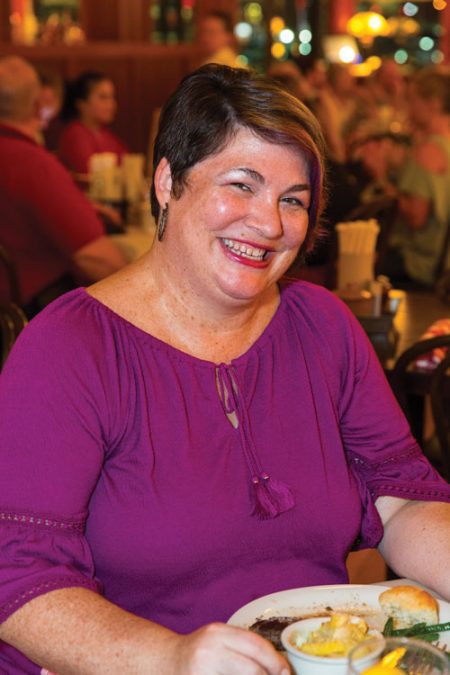 As the co-founder and head organizer of Delaware Burger Battle, Cross is perhaps the perfect person in this area to rate bison as it compares to beef. In addition to Burger Battle, Cross has a long history of promoting a multitude of local events, often utilizing her expertise in social media and her contacts in the region.
What she ordered: Bison filet with green beans and “Aunt Fannie’s” squash casserole.
Thoughts on her meal: I enjoyed the meal. I enjoy steakhouses, and there were parts of this meal that were “lighter” than what I’m used to. A small biscuit with the steak was smart. I can eat enough bread at an Outback or Firebirds to feed a family for a week. I felt like I had a lot of [other options that] I would have chosen from besides what I ordered. Great burger selection.
Thoughts on ordering bison again: This is at least my second time having bison. I quite liked having it in steak form. Great chewing texture, and a flavor that was very similar to beef, but subtly richer and lighter at the same time.
Other thoughts: I did not get this same impression the first time I visited. Hearing about the company’s commitment to the environment—the way each restaurant operates like a non-chain establishment, with hand-picked suppliers and commitment to farmers—really sold me on this unique restaurant. I hope every guest gets to hear about the benefits of eating bison and the breed’s modern history. 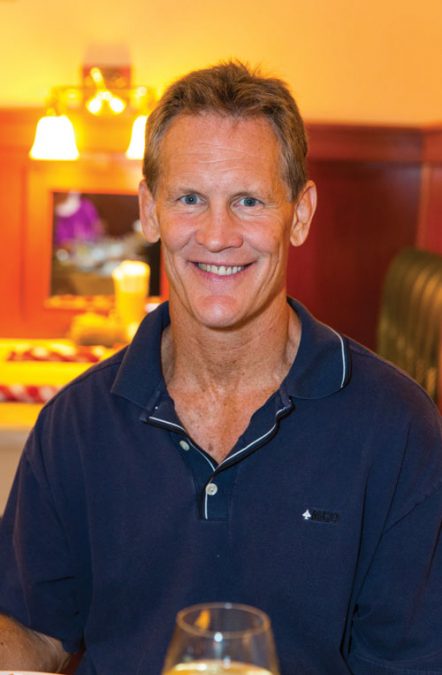 Henry Milligan
Known in this area as “Hammerin’ Hank” for his impressive boxing career in the ‘80s and ‘90s, Milligan still stays fit physically and mentally, working as a personal fitness instructor by day and an adjunct professor at Wilmington University by night. He’s also an actor. In fact, Milligan might be the only person on the planet to have traded punches in the ring with Mike Tyson and lines in a scene with Robert De Niro.
What he ordered: Bison Kansas City Strip with broccoli and sweet potatoes.
Thoughts on his meal: I am a big beef eater, and this compared very favorably with some of the best steaks I have had. One small negative was that the broccoli was not great: undercooked and bland. But the rest was superb.
Thoughts on ordering bison again: I loved it, and would do it again tomorrow. Can we?
Other thoughts: The methods of operation were interesting and seemed very meticulous. I am looking forward to returning, even though it is a little out of the way for me. 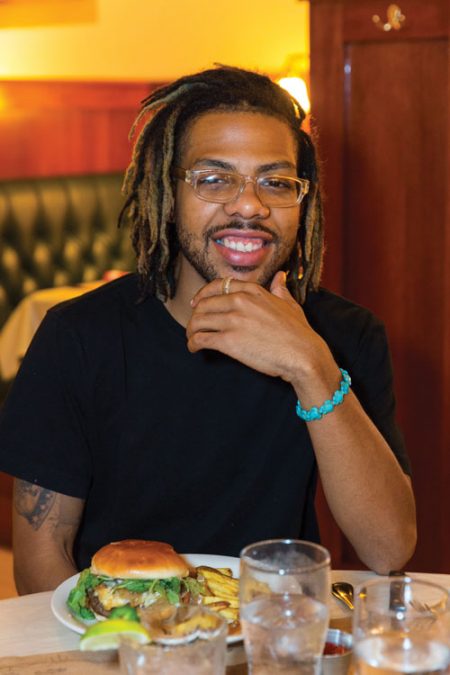 At just 25, Vann has worked wonders in Wilmington’s art scene, rising to prominence with his animated and thought-provoking paintings, designs and murals. Last year he received the Delaware Division of the Arts Emerging Professional Award. In 2016 he also created the March cover for Out & About.
What he ordered: The Avalon burger with French fries. I was drawn in by the Gruyere cheese.
Thoughts on his meal: I was impressed with the quality and taste of everything that I had. Especially the jalapeno margarita!
Thoughts on ordering bison again: I was curious at first because it’s been a while since I’ve had it, so I kind of forgot what to expect. I was pleasantly surprised because in my mind I pictured it being tougher than a normal beef burger, but the bison is definitely on another level. It is a little more pricey, but you can taste the difference in the quality compared to normal beef.
Other thoughts: Seems like they put a lot of consideration into how they go about crafting the food. Everything tasted fresh and looks like there are several steps in place to ensure quality. I like how they consider the environment and the lives of the animals as a part of their mission. Great food and great service overall. 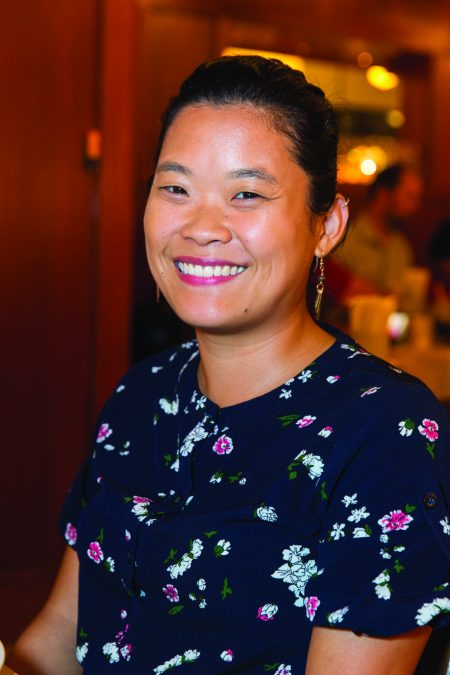 Leeann Wallett
Wallett knows about food: She writes on the subject for both Out & About and Delaware Today, where she also writes restaurant reviews. Her Out & About piece about foods that can help fight of sickness in the winter months appears on pg. 35. Wallett has lived in many areas of the country, calling the Wilmington area home for the past few years.
What she ordered: Pot roast with garlic mashed potatoes and green beans.
Thoughts on her meal: It was a lovely meal with stellar company and outstanding hospitality. I was excited to try multiple cooking techniques/preparations, since we all opted for different entrees. Not only was my pot roast great, the bison filet and the meatloaf were solid on their own.
Thoughts on ordering bison again: This wasn’t my first time eating bison, so I was excited to try a different preparation (pot roast vs. burger). I was happily surprised at how lean, tender and flavorful the meat was. It even made outstanding leftovers.
Other thoughts: My first impression was skeptical, to say the least. But as I talked with the restaurant operator and [the staff], I was surprised at how much thought went into the branding and operation. These days, you hear a lot about “sustainable” farming/ranching/cooking practices and “scratch-made” food, but those terms can be very deceiving. However, Ted’s embraces this whole-heartedly and is disrupting the restaurant industry with truly “sustainable” practices and “scratch-made” food.

Ted’s Montana Grill is the result of a partnership between LongHorn Steakhouse founder George McKerrow Jr. and media mogul Ted Turner, also a notable philanthropist and environmentalist. In 2008, they launched “The Green Restaurant Revolution” tour, meeting with restaurateurs around the country—including Philadelphia, New York City and Washington, D.C.—to promote sustainable restaurant practices. Ted’s Montana Grill is located at 3194 Fashion Center Boulevard, across from the Christiana Mall. To make reservations, call 366-1601.

Can adding bison to the menu help strengthen their numbers?

It is estimated that as many as 60 million American bison* roamed the plains during the times of the first colonies. But reckless hunting practices in the 1800s brought the species to the brink of extinction. By 1902, there were fewer than 800 bison left in North America.

Relatively speaking, the past 15 years have been a good stretch for bison. Last year, the National Bison Legacy Act, signed by President Obama, elevated the bovid to the status of “national mammal,” where it joins the bald eagle, our national bird.

More important, however, is the fact that the past 15 years have seen the largest surge in numbers of bison since the near obliteration of the species. At the end of the 20th century, bison numbered around 250,000. Today those numbers have more than doubled.

Oddly enough, restaurants share some credit for the boost. Ted’s Montana Grill, which opened its first store 15 years ago, now serves more bison than any other restaurant chain in the world. Its operators say that by increasing demand for bison meat, they have encouraged more ranchers to raise larger herds.

The sudden rise in numbers largely support that claim, as the greatest increases of bison have occurred on privately owned lands.

Ted’s Montana Grill developed a 22-page “Sustainability Story” to provide an overview of the chain’s high standards in conservation and environmentalism. In addition to reviewing their efforts in energy efficiency, water conservation and waste reduction, the document also includes a section on bison.

“The ultimate cornerstone of Ted’s Montana Grill’s sustainability efforts is bison,” it reads. “Because bison are a natural part of the North American ecosystem, bison ranching can be beneficial to the natural environment. Grazing bison help promote a healthy ecosystem with roaming hooves that function as natural tractors, aerating the earth and rotating seeds. Their waste is a potent fertilizer.”

Although a cynic might dismiss these statements as “potent fertilizer” in a marketing sense, they are not exaggerations. In 2010, a study of the American bison by the International Union for Conservation of Nature argued that the animals “have a marked influence on the patterns of occurrence, distribution, and density of other species.”

“No other wildlife species has exercised such a profound influence on the human history of a continent,” the study concluded.

Those are big words for a big animal—particularly one that seemingly gets so little attention. Maybe with more awareness and more interest, the bison population can double again over the next 15 years.
Nov. 5 is National Bison Day. Ironically, one of the best ways to celebrate and promote the growth of the species may be to order it for dinner.

*Bison are often inaccurately called “buffalo” (We all know the verse from “Home on the Range”: “Oh, give me a home where the buffalo roam”), but the American bison lives in North America, while the two main buffalo species reside in Africa and Asia. A small population of bison relatives called the European bison lives in isolated parts of Poland.