A breakfast drink in colonial times, its popularity
suffered devastating blows before exploding on the market over the past few years

Cider has a long and colorful history. In the United States, it predates beer as the drink of choice for 17th century colonists, and it maintained that prominence until the Industrial Revolution and later, Prohibition, reduced its popularity.

But today cider* is enjoying a resurgence. Due partly to a craft beer movement that has opened new doors, U.S. production has tripled to more than 32 million gallons over the past three years, and sales are expected to climb an unbelievable 80 percent this year compared to 2013.

Made from apple juice—and now pear and pomegranate, and many other fruit options and combinations—cider is fermented like beer or wine in tanks, then placed in bottles or kegs. Like beer, colors range from light to dark, with alcohol content similar to some beers, at about 5 percent ABV.

“Cider is up there with the most popular stuff right now,” says Jeff Kreston of Kreston Wine & Spirits in Wilmington. “It’s one of the faster-moving products.”

Cider has had an international appeal for centuries, especially in England, Ireland, France and Spain. It was drunk before the Norman conquest of England in 1066, and can be traced back to the Roman Empire. The United Kingdom has always maintained the highest per capita consumption and currently accounts for 25 percent of the world’s production, boasting some of the largest cider-making companies in the world, such as H.P. Bulmer of London.

When colonists came to America they brought cider with them, and drank a lot of it. It was considered a healthy alternative to water, which was often unclean and potentially lethal.
By 1767, cider consumption in Massachusetts was 35 gallons per capita. It was often drunk with breakfast, even though it contained at least 6 percent alcohol. (John Adams and Thomas Jefferson were said to down it by the tankard every morning.)

Then, during Prohibition (1920-33), cider was banned along with other alcoholic beverages, and fields of apple trees grown specifically for cider use were burned to the ground. These trees, whose fruit was more bitter and tannic than apples grown for eating, would take three to six years after Prohibition to produce apples again. Largely as a result, for the next few decades cider disappeared from the public’s radar.

Cider didn’t make a noticeable appearance again in the U.S. until the late 20th century, but over the past two to three years its popularity has escalated. Area experts believe that the jump in sales has a direct connection with the craft beer movement.

“Cider really fits where craft beer was 10 years ago,” says Chris Tigani, president of World Class Wholesale in New Castle. “It has major potential. The craft beer revolution has helped many people be okay with experimenting with new products, and the country as a whole has a love affair with sweeter things. Customers have a little bit of a hop hangover.”

Says Kreston, who started noticing costumer interest peak about two years ago when brands like Angry Orchard began to attract more consumers: “I think it’s part of the craft beer movement. The markets are similar—the original ciders weren’t exciting, and now as they get into it more and more, unique ciders and flavors are developing.” Another advantage: Cider is gluten-free, thus appealing to customers who might be looking for an alternative to beer.

While cider sales are surging at liquor stores, bars and restaurants, a dichotomy exists within the industry between many concentrated, mass-produced ciders and craft ciders.
Most popular brands like Woodchuck and Strongbow, which use concentrated apple juice and additives, originally controlled 90 percent of the cider business. Macro brewers like Stella Artois are on the cider wagon with their own light-bodied cider, and big-time Boston Beer Company, Inc. created Angry Orchard Hard Cider. But market shares for mainstream players are down from more than 80 percent to 30 percent, says Tigani, because craft ciders are on the rise.

Ciders like McKenzie’s, Doc’s Draft Hard Ciders and even Crispin Hard Cider are made using traditional methods with all-natural, hand pressed apples. The quality that people have come to expect from craft is now “coming to pass” in the cider category, Tigani says. “You’re seeing a lot more people using cider from hand-pressed apples and making an all-natural product.”

Some O&A cider suggestions for your consideration: 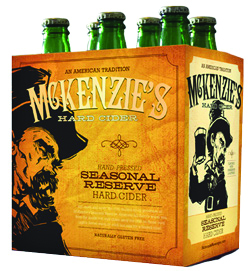 McKenzie’s Seasonal Reserve: As with all of McKenzie’s products, this variety is crafted from apples sourced close to the New York brewery, in an area known as the “Apple Belt.” And with the addition of cinnamon, nutmeg, and other subtle spicy flavors swirling around in each bottle, it’s like distilled apple pie. A perfect beverage for fall and the end-of-the-year holidays.

The Muse from Angry Orchard: Experts might argue whether this is actually a true hard cider or a sparkling wine, but the wiser among them will simply sit back, sip and enjoy. Sweet flavors of apples mixed with seasonal spices and notes of oak, all lifted with champagne bubbles – what’s not to like?

*Cider, also known as “hard cider” to many Americans, is not to be confused with apple cider, a non-alcoholic drink.